If you are new to emotional healing, you may be wondering who is Gary Craig and what are emofree and EFT?

Gary Craig developed EFT, the Emotional Freedom Techniques, in the early 1990’s. His amazing discovery was based on a group of energy healing techniques called Thought Field Therapy (TFT), which Gary had learned earlier from psychologist Dr. Roger Callahan. A professional engineer, Gary took what he learned from Roger and distilled it into a simple process that just about anyone can use to become as he called it “emofree.”

At that time, Gary Craig may not have imagined the power of his discovery. But he seems to have been fascinated with the possibilities.

As it turned out, the development of EFT tapping, as it is commonly called now, was a fitting result of a lifelong fascination. Gary was born in 1940 and he developed an interest in psychology and personal improvement in his early teens. At the young age of 13, he realized that our lives are the products of our thinking.

Gary used the term “emofree” in the development of his work and this term has become associated both with the Emotional Freedom Techniques and more specifically with Gary Craig. It represents the purpose of EFT, which is to become emotionally free. When you release stuck emotional energy, you free yourself to live fully.

It’s so fast, simple, and non-invasive, Gary Craig suggests to try EFT on everything. Many people to, with fabulous results. You can do this too, with nothing to lose and much to gain.

CLICK HERE NOW to get your FREE Holistic EFT “Get Started” Manual and Video Series! You can learn EFT today and also discover the power of a holistic approach.

How Does Gary Craig Explain the Power of EFT?

The theory behind EFT tapping, as it is often called, is that it works by balancing the body’s energy system. It integrates understanding of the acupuncture meridians with a simple process of tapping on a series of points on the face and upper body to do what Gary calls a universal overhaul. Similar to overhauling a car engine, this brings the whole energy system into balance, often with astounding results. Results frequently occur in a matter of minutes and just about anyone can learn to do it.

It’s no wonder many people call the Emotional Freedom Techniques a modern miracle. Craig reports that EFT has proved itself to be clinically effective in thousands of cases with stress, fears and phobias, anxiety, depression, food cravings, and more. It even produces positive results with a wide range of physical conditions like pain, headaches, and breathing problems. This validates the connection between the mind, emotions, and body, providing more evidence that emofree can also contribute to being physically free.

Our Emofree Journey with Gary Craig

We had the pleasure of meeting Gary in 1998, shortly after we learned EFT. As holistic practitioners, we quickly recognized its power and potential. We related completely to Gary’s dream of helping people to be emofree and immediately decided to write a book about it. We, too, wanted to get the word out to as many people as possible.

We were honored that Gary Craig agreed to write a foreword for our book, Getting Thru to Your Emotions With EFT. So we’ll let him tell you a little more in his own words.

This is how Gary described EFT in Getting Thru to Your Emotions With EFT:

By opening this book, you have entered the doorway to the new Healing High-Rise. This doorway leads to new discoveries in the field of human potential that are creating miraculous changes in people’s lives that only a few years ago were deemed impossible. As you open the door and step inside, your possibilities for healing will vastly increase. This book provides a powerful array of techniques that just about anyone can use to overcome obstacles to experiencing genuine emotional freedom.

In 1991, I had the opportunity to study a meridian-based healing system under the tutelage of Dr. Roger Callahan. By 1995, I transformed and simplified those remarkable procedures into a form that just about anyone can use. I call it Emotional Freedom Techniques (EFT for short). Phillip and Jane Mountrose have done a superb job in bringing you the essence of these discoveries… and more.

Some are understandably skeptical of the validity of these processes. Such doubts always accompany new breakthroughs and innovations. But the proof is in the dramatic results, and, not surprisingly, many therapists are drawn to the speed and effectiveness of EFT.

EFT is simple, relatively painless, quick and can be self-administered. Further, it can provide relief for an extraordinary range of problems. After years of developing these techniques, my jaw still drops at the many “one minute wonders” people experience, sometimes eliminating what were severe problems that had been around for decades. But even when the cases are more complex, it often takes only a few sessions for the client to gain relief. It is rare for a problem to take weeks or months with EFT.

EFT and the Getting Thru Techniques address the whole energy system. They help you to transcend old paradigms and stubborn problems. The processes are designed to bring you to wholeness, often in more dramatic and effective ways than you might imagine possible.

So explore this new Healing High-Rise with Phillip and Jane. Let this dedicated pair help you fulfill your potential, clear blockages, and move upward within the Healing High-Rise. The view from the top is spectacular!

We feel honored to have been some of the early implementers of EFT in 1998. Since that time, we’ve become recognized as pioneers and experts with EFT and more.

We’ve seen EFT transform lives hundreds and hundreds of times. We’ve also watched the influence of Gary Craig’s dream of being emofree grow with tremendous speed. Its popularity alone is evidence of its effectiveness and like most EFT users, we suggest trying it on everything. 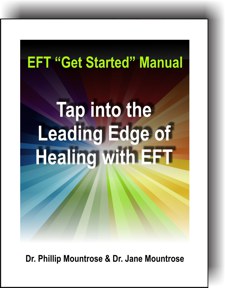 Connect with the power of being emofree. Learn more about Gary Craig and EFT today.

It’s an investment of your time and energy that will pay back over and over in the weeks, months, and years to come. Imagine the possibilities!

What is Awakenings Institute?

This site has been created and maintained by Awakenings Institute and Holistic Communications.